First, molecules exhibit directed movement along temperature gradients in solution, an effect called thermophoresis (Duhr & Braun, 2006). Such thermophoretic movement of a molecule is characterized by its size (hydrodynamic radius), its surface charge, and its hydration shell. All three parameters can be affected by binding of a ligand molecule. Thus, a concentration-dependent titration of the target molecule’s ligand induces changes in the thermophoretic movement. These changes translate in quantifiable, spatial fluorescence changes, which are easily tracked optically via the target fluorescence.

The thermophoresis and TRIC signals are additive and thus both contribute to the high sensitivity and robustness of MST measurements towards molecular binding events of all kinds. Thus, MST can be used for determining the affinity and binding strength of almost any kind of molecular interaction with very low sample consumption and very high sensitivity.

Figure 1. Technical MST setup. (A) MST measurements take place in small glass capillaries. Infrared and fluorescence lasers are used for generation of the MST effect and sample tracking. (B) TRIC and thermophoresis together account for a time-dependent change in fluorescence upon infrared-heating of the sample capillaries. (C) Multiple MST traces are recorded for different mixture ratios of target and ligand molecules. (D) Dose-response analysis of the MST traces allows for determination of the steady-state affinity of the target-ligand interaction. 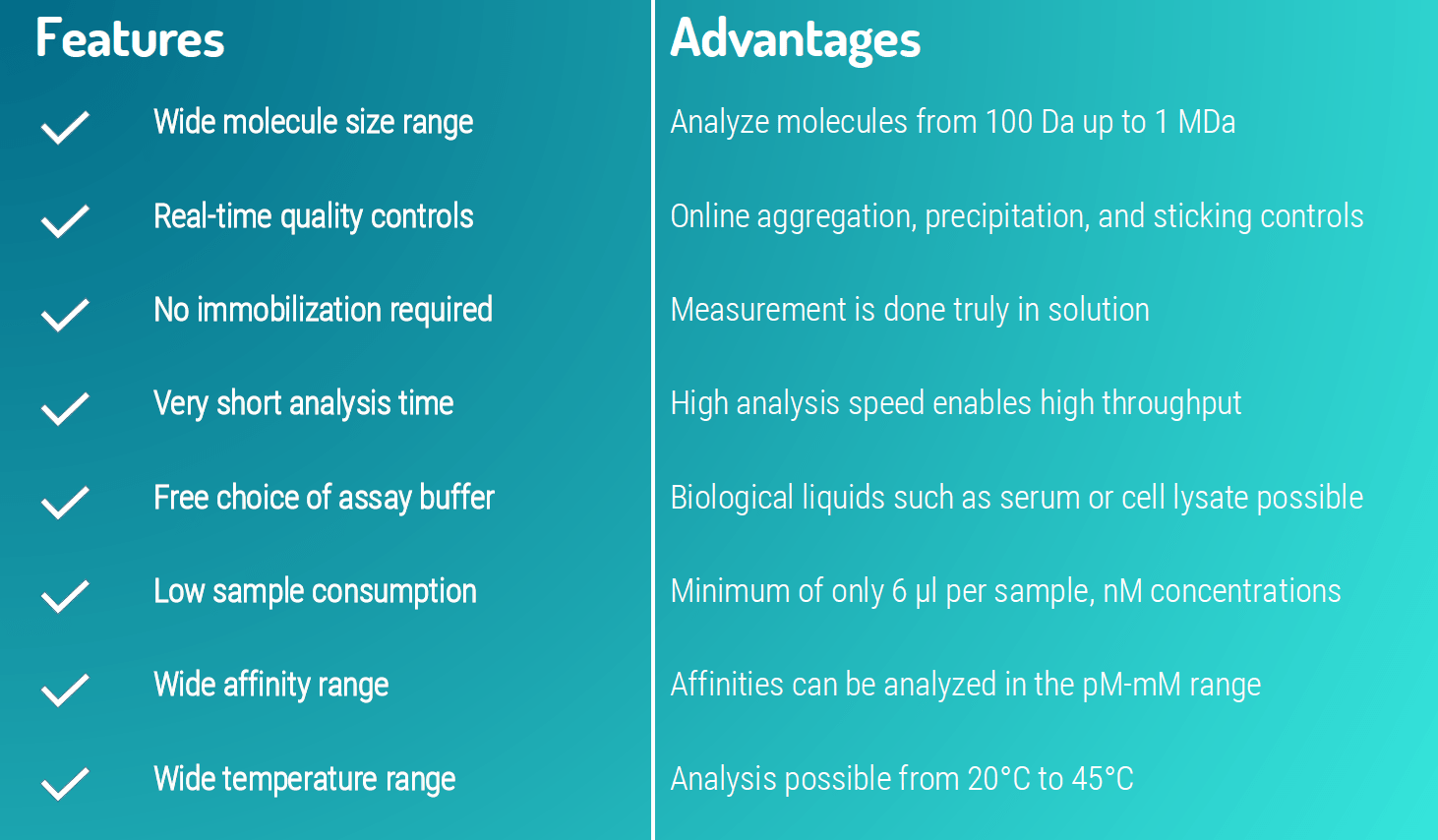 Aptamers are single-stranded nucleic acid molecules with a well-defined, folded tertiary structure. With that structure, aptamers have the potential to recognize various classes of target molecules independent of their size. Even challenging targets such as small molecules can be bound by aptamers with high affinity and specificity (Kim & Gu.2014). In general, an analysis of the interaction between aptamers and small molecules in detail is challenging. It is often complicated to access their basic binding parameters such as their affinity using many biophysical methods (Entzian & Schubert. 2016). Here, we demonstrate how MST-assay can be used to map the binding site of the ATP aptamer DH25.42 and to set up an assay format that allows a fast and precise affinity characterization of aptamer-small molecule interactions. For mapping the specific binding site, the binding affinity of the DH25.42 aptamer towards multiple ATP-analogues (ADP, AMP, SAM, dATP, CTP, GTP and adenine) were measured and compared. 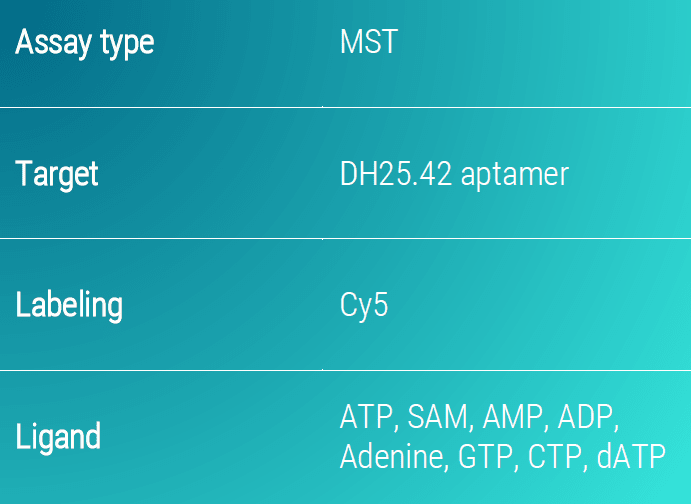 Aptamers
Use of aptamers as binders

Results: Interactions between ATP and a site-specific aptamer

The ATP-analogues ADP, AMP and SAM differ in the 5’-position of the ribose compared to ATP. Collating the detected affinities of ADP (28.9 ± 5.3 µM), AMP (67.9 ± 8.3 µM) and SAM (45.2 ± 7.9 µM), we suggest that this position has no or only minor influence on the binding behavior of the aptamer (Figure 2). dATP, lacking the hydroxy group at C2 of the ribose, was also bound by the aptamer with a slightly reduced affinity (66.7 ± 10.1 µM). In contrast, CTP, with a purine instead of the ATP-pyrimidine ring, was not detected by the aptamer, implying that adenosine represents the main aptamer binding site. This indication is further strengthened as adenine is bound by the aptamer with an affinity of 68.4 ± 5.8 µM. It is worth mentioning that GTP, which has a high overall similarity to ATP remains unbound by the aptamer narrowing down the binding site. 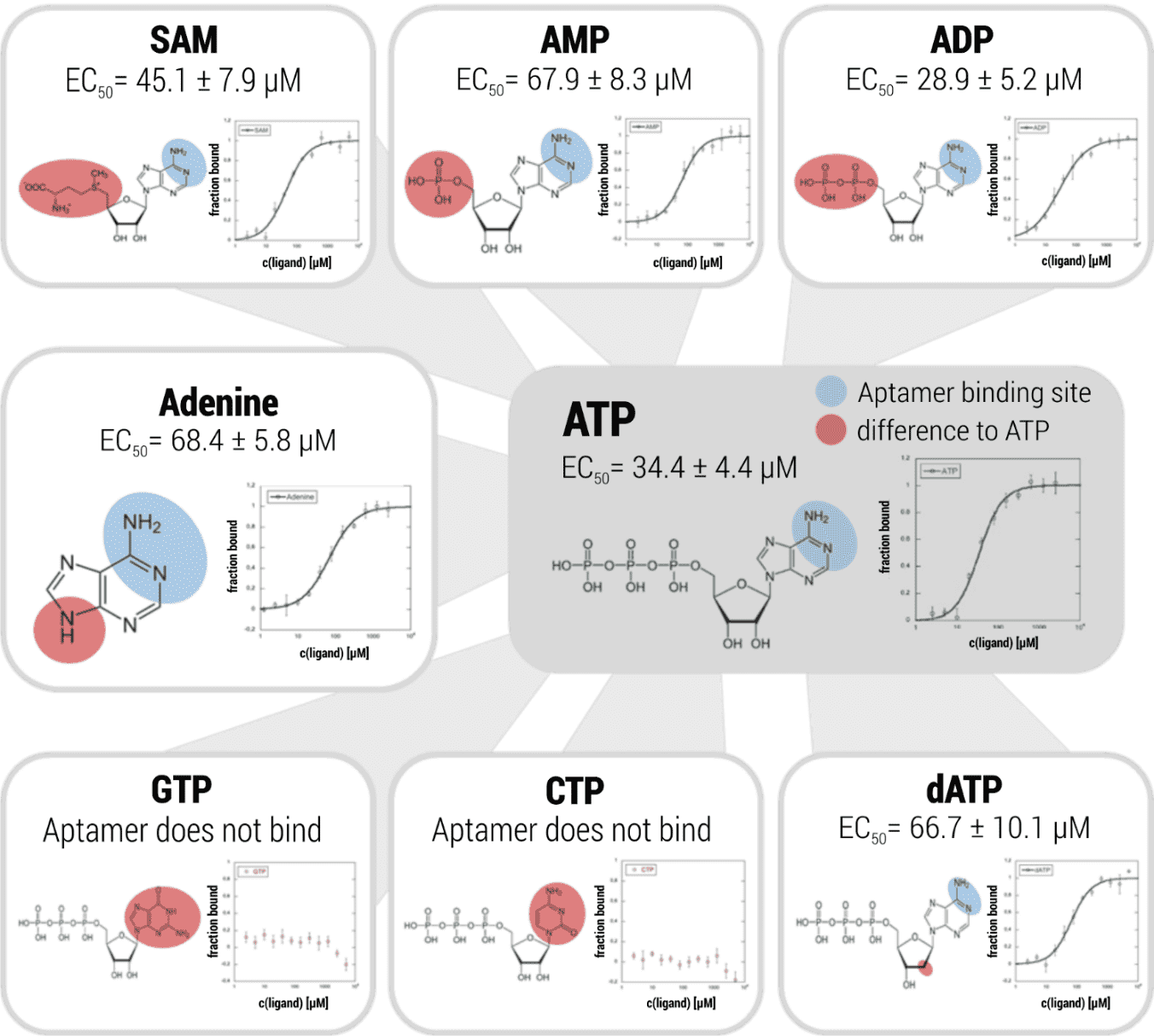 Figure 2. Binding-site mapping of an ATP-aptamer. ATP, ADP, AMP, SAM, dATP, CTP, GTP and adenine were titrated against the ATP aptamer DH25.42. Dose-response data were fitted to the hill equation (EC50). Error bars show the standard deviation derived from three repeats. The blue shaded area indicates the binding site of the aptamer on the adenine group of ATP, the red shaded area shows the molecular difference to ATP.

Considering the binding affinity of DH25.42 aptamer to various ATP-analogues, we successfully established a MST set up that allows a fast and precise kinetic characterization of any aptamer-small molecule interaction. Additionally, we could map the binding site of the ATP aptamer DH25.41 down to a specific molecular moiety at the adenine of the ATP molecule.