Molecular interactions that can be measured with ITC

If you are uncertain whether your type of interaction can be measured with ITC or if you want to use the 2bind ITC service just leave us a message: 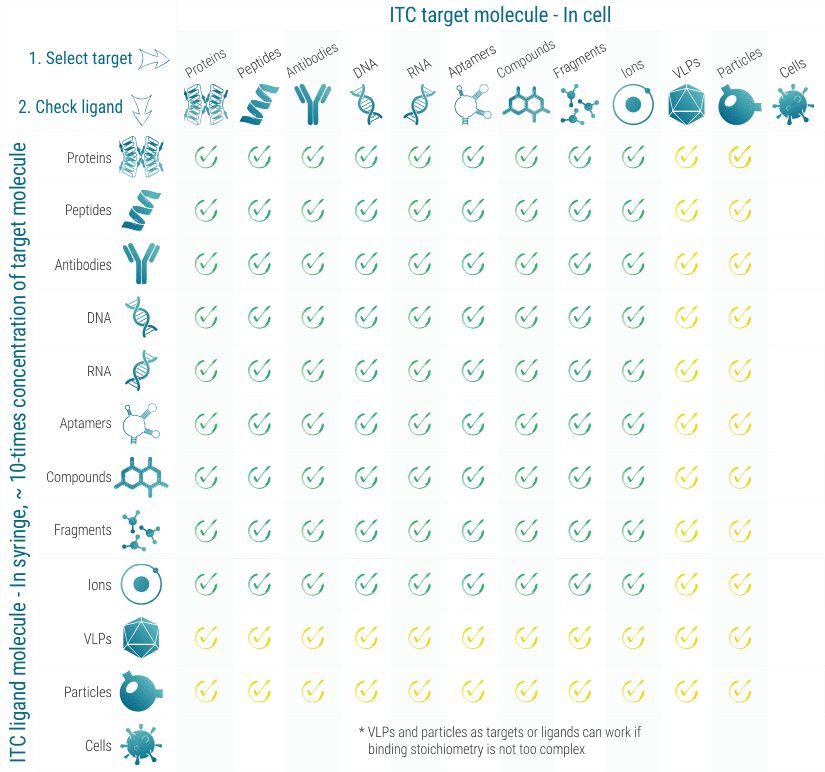 What ITC can tell

ITC excels in revealing the enthalpy or binding heat (ΔH) and entropy (ΔS) of molecular interactions as well as giving the free enthalpy of binding (ΔG).

ITC can tell the affinity of molecular interactions (dissociation constant KD) derived from the thermodynamic measurement.

ITC will directly tell you the precise stoichiometry (i.e. 1:1 or 2:1 binding) of your molecular interaction.

2bind offers a variety of services using the Isothermal Titration Calorimetry technology. Benefit from comprehensive and precise analysis of molecular interactions. Enjoy thermodynamic profiling or your interaction of interest.

The 2bind ITC services can be combined as you choose for all questions in drug discovery, antibody development, protein biophysics and analysis, as well as aptamer characterization.

Interactions between biomolecules or macromolecules like proteins, nucleic acids, or lipids are essential for all cellular processes. The characterization of interactions between biomolecules is thus an important task in basic and applied life science, as well as in the pharmaceutical and biotech industry. Every interaction between two molecules generates or absorbs heat, depending on the thermodynamic nature of the interaction. This heat change is measured in Isothermal Titration Calorimetry (ITC) by titrating one interaction partner (usually present in a syringe) to the other interaction partner (usually present in a reaction cell). From the raw heat pulses, binding isotherms are derived that deliver comprehensive information of the affinity, stoichiometry, and thermodynamics of molecular interactions.

ITC is widely used for quantifying binding affinity, for drug development (candidate optimization and validation), for measuring thermodynamics of molecular interactions, for confirmation of binding targets in small-molecule drug-discovery, for determination of binding specificity, or for validation of IC50 and EC50 values.

Isothermal titration calorimetry (ITC) is an essential tool for the study and analysis of molecular and macromolecular interactions between proteins, nucleic acids, lipids, and small molecule inhibitors or effectors. ITC is also widely used in drug discovery for hit validation, lead optimization, and elucidating mechanisms of action.

ITC directly measures the heat released or absorbed during molecular binding events and the concomitant formation of molecular complexes. The label-free, in-solution characteristic of ITC experiments allows for the direct and native-like determination of all important parameters that characterize the thermodynamics of a molecular interaction: the binding constant (KD), the reaction stoichiometry (n), the observed binding enthalpy (ΔHobs), the observed binding entropy (ΔSobs), the observed heat capacity of binding (∆Cobs) and finally the change in free enthalpy of binding (ΔG). Thus, ITC generates a complete thermodynamic profile of a molecular interaction and, for example, can help to differentiate between binding reactions that are driven by enthalpy (due to the formation of non-covalent interactions across the binding-interface) or by entropy (due to the release of water molecules from a binding pocket).

The main focus of Isothermal Titration Calorimetry (ITC) lies on the analysis of the thermodynamics and stoichiometry of molecular interactions:

A comparison of ITC with other biophysical interaction analysis methods is available in our Technology Comparison Guide.

What kind of molecular interaction can be measured?

With ITC it is possible to measure bi-molecular interactions between almost any kind of molecule, most importantly proteins, DNA, RNA, small molecule compounds, lipids, carbohydrates.

Can I measure without labeling molecules?

Yes. ITC does not require any labeling prior to the measurement as it is a label-free method.

Can I measure without immobilizing molecules?

What information do I get from an ITC experiment? Are thermodynamics possible?

The ITC technology generates a complete thermodynamic profile of the interaction including the binding enthalpy ΔH, the binding entropy ΔS, as well as the free enthalpy of binding ΔG. Additionally, ITC gives the stoichiometry of a molecular interactions and can also tell its affinity.

Which range of affinities can be quantified?

ITC can determine binding affinities in a wide range from nanomolar (10-9) to millimolar (10-3) affinity. Keep in mind that the weaker the affinity of an interaction, the higher the required samples concentrations are in order to yield a sufficient enthalpy signal.

Can I measure binding kinetics with ITC?

ITC measures the thermodynamics and equilibrium binding constants of molecular interactions and it is thus not possible to determine association and dissociation rates (binding kinetics). For the analysis of binding kinetics, please see Biolayer Interferometry.

What is necessary for a successful determination of the thermodynamic parameters of an interaction?

What are the required sample concentrations?

f these requirements are a concern, it is best to consider alternative methods like MicroScale Thermophoresis or nanoDSF that both require much lower sample concentrations (nM to µM range).

How much sample do I need?

To fill the sample cell, 280 µL are needed. The minimum volume to fill the syringe is 40 µL, although we recommend that 60 µL be used to avoid bubbles or foaming during automatic loading of the syringe. If these requirements are a concern, it is best to consider alternative methods like MicroScale Thermophoresis or nanoDSF that both have minimal sample consumption (low µl range).

Can I measure the binding of small molecules?

Yes. ITC is not only able to characterize the interaction between macromolecules like proteins or nucleic acids, but also between macromolecules and small molecular inhibitors, effectors, or the like. Keep in mind, however, that generally, these small molecules are required at rather high concentrations in the final assay buffer (usually mM concentrations). This might be problematic for some molecules. In such cases, it is best to use alternative techniques like MicroScale Thermophoresis or nanoDSF that can work with lower sample concentrations.

Do I need to prepare my samples in a specific way?

It is important for a successful and high-quality ITC experiment that both interaction partners are in identical buffer solutions. Other large heats of dilution can mask the actual heat generated or absorbed by the interaction. Usually it is best practice to thoroughly dialyze both samples (interaction partners) against the same buffer prior to the ITC experiment or to use desalting columns for buffer exchange.

f these requirements are a concern, it is best to consider alternative methods like MicroScale Thermophoresis, nanoDSF, or Biolayer Interferometry that allow measurements in almost any kind of buffer and biological liquid.

How high is the throughput?

Establishment of specific experimental conditions usually requires one working day. After that, depending on the number of injections and time spacing between injections, around 4-8 experiments are possible over a typical working day.

For high-throughput analysis of molecular interactions it is best to consider MicroScale Thermophoresis or nanoDSF, as both give a much higher throughout compared to ITC. For more information on high-throughput interaction analysis take a look at our Drug Discovery Services.

What is the temperature range?

The ITC temperature range in which measurements are possible is 10°C to 80°C. Please keep in mind that higher temperatures may influence buffer or sample solution homogeneity and may thus compromise measurements. If temperatures above 80°C are of interest, consider the nanoDSF technique, which can measure at temperatures up to 95°C.

Are there limitations to the buffers or additives I can use?

In general, the buffer or additive should not negatively affect the stability or homogeneity of the sample. Moreover, it is important to minimize artefactual heat by using a buffer with a low enthalpy of ionization (e.g. phosphate, citrate, or acetate buffers). Common biological buffers with amino groups such as TRIS or HEPES are not recommended for ITC due to their high heats of ionization. Also, avoid using DTT if possible, because DTT can cause high background heat. If a reducing agent is required nonetheless, use β-mercaptoethanol or TCEP at a maximum concentration of 1 mM.

Can I measure samples that contain DMSO?

Yes, this is possible. If one interaction partner (e.g. a small peptide dissolved in DMSO) contains DMSO, it has to be added to the solution of the second interaction partner (e.g. protein in the sample cell) to the same concentration in order to avoid buffer mismatch and high dilution heats. Usually 2-5 % of DMSO can be added to protein solutions in the short term.
Contact Specialist